I feel that Ezra Pound had a genius for poetry. I want to pursue why his translation (from Old English) attracts me, want to read his more translation of The Exeter Book. As in many explanations, indeed, much alliteration.

The Seafarer by Ezra Pound
(from the Anglo-Saxon version)


May I for my own self song's truth reckon,  Journey's jargon, how I in harsh days  Hardship endured oft.  Bitter breast-cares have I abided,  Known on my keel many a care's hold,  And dire sea-surge, and there I oft spent  Narrow nightwatch nigh the ship's head  While she tossed close to cliffs. Coldly afflicted,  My feet were by frost benumbed.  Chill its chains are; chafing sighs  Hew my heart round and hunger begot  Mere-weary mood. Lest man know not  That he on dry land loveliest liveth,  List how I, care-wretched, on ice-cold sea,  Weathered the winter, wretched outcast  Deprived of my kinsmen;  Hung with hard ice-flakes, where hail-scur flew,  There I heard naught save the harsh sea  An…
Read more
June 16, 2019 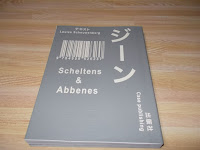 We went to a distinct bookshop POST at a cul-de-sac in Ebisu, Tokyo last week, met again Dutch artists Scheltens & Abbenes. Their exhibition was held there at the second time. First, our encounter with them had been at NYC and we had been surprised by their artworks with proficient technique. Also this time there were some new findings in their photos. https://vimeo.com/44672734

Apparently, therein, lay both the variety and its own particular style of selection. The bookshop has adopted, sold visual books on mainly including fine art, graphic design, photography with a unique concept that it showcases only one publisher’s publication at a time according to its website. Once entering the shop (or gallery), soon I felt an owner or curator of the shop might have deep knowledge for publishing books. Plenty of books with high quality were curated, introduced and orderly put on shelves. Moreover, there had been lectures to mak…
Read more
June 15, 2019
Today's poem

The Petrarchan sonnet might relate to a battle field somewhere, finely draws one scene of the nature by using metaphors. In the octet, animals' motions in moments bring a surprise with pithy expressions. In the sextet, first, just a turn, and the third line represents the beauty of nature. Deadly silence in the last line.

The battle rent a cobweb diamond-strung
And cut a flower beside a ground bird's nest
Before it stained a single human breast.
The stricken flower bent double and so hung,
And still the bird revisited her young.
A butterfly its fall had dispossessed
A moment sought in air his flower of rest,
Then lightly stooped to it and fluttering clung.

On the bare upland pasture there had spread
O'ernight 'twixt mullein stalks a wheel of thread
And straining cables wet with silver dew.
A sudden passing bullet shook it dry.
The indwelling spider ran to greet the fly,
But finding nothing, sullenly withdrew. 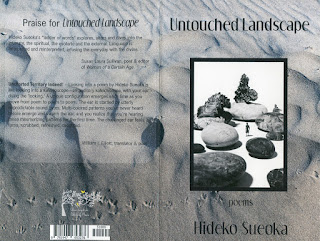 My debut chapbook Untouched Landscape is registered to National Poetry Library in London.

Thank you to librarians, thank you to National Poetry Library.
https://bit.ly/2X0sK1j 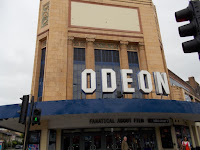 What a lovely day in London! On Sunday, May 2019, I made a poetry tour to Holloway, Islington with a Londoner poet Joolz whose debut poetry collection written with Hilaire was out last March. As the subtitle The hidden histories of London’s unsung heroines, north and south of the river would suggest, the hidden women’s history appears in the book. The collection explores the presences and absences, the interplay of the present and the past – both visible and imagined based on her precise research on, sometimes, handwritten manuscripts in historical archives. She read aloud poems in the book relating to places for me.
(1) A poem ‘Hollywood Comes to Holloway’       Our tour started from Holloway station (Piccadilly line). Along Holloway Road, we strolled. First, Joolz read the poem in front of the building the Holloway Odeon with her nostalgia to the architecture having an art deco outline. A…
Read more
June 02, 2019
Troubadour Reading Event

I should first write the Silves workshop 2019. However, I have basked in my delight of hearing gorgeous spoken-words event at the Troubadour Café in London on Monday, 27th May. This was the first time for me to attend as audience such an event organized by Coffee-House Poetry.
In a first part, poems of Troubadour poets written for the event were premiered. I was stirred up by a second part: reading performance by poets Pat Boran, Richard Douglas Pennant, Martina Evans, and A. F. Harrold with music by Peter Foggitt. Their performance poetry was based on responding unpredictably to each others’ themes in work, keeping contact with listeners. I felt that such collaboration might have been a sort of development of Japanese Renga. I didn’t know all the poets, however, the encounter with hearing of them influenced me so much, especially, Martina Evans and A. F. Harrold. Martina Evans read, enunciated her poems with humour like whispering while memorizing all poems for …
Read more
More posts