Just uploaded on the website of Poetry Foundation. Association game of sound and precise crafting. The inflexion of words in respective couplets and quatrains produces the reverberation of tones. March wind (東風, kochi) brings gentle echoes of a wind bell hung, left under eaves. Absolutely, the beauty of poetic form, too.

on an island
landscaped with chandeliers
abandon handcuffs
standstills
and        backhands

notwithstanding
thousands of oleanders
and dandelions
handpicked

and mandrake
and random demands
the by…
Read more
February 18, 2020
Today's poem 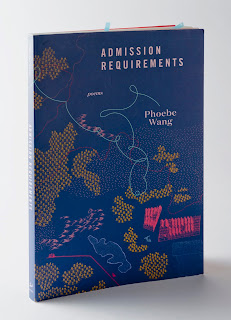 Last year, "ADMISSION REQUIREMENTS" by a Canadian poet Phoebe Wang grabbed my heart with book design like combination of digital mapping in the exhibition of World Book Design 2017-2018, Tokyo. After back home, I soon purchased it. A Canadian aroma fills the first section including verses on Chinese and Japanese gardens. A poem "STILL LIFE WITH DREAM INTERPRETATION" tells Taoism in the Zen painting. In particular, in a prose-poem 'RISING TIDE', there is a drawing of the beauty of shading tide, a bit a sort of a lagoon and subtleties of emotions, recalling the estuary of the Severn River in the UK, now mostly lost in Japan for embankments. The collection carries readers to water different from other continents while turning pages.

*** The annual exhibition has introduced many attractive Canadian books.

One frame is alive - a kite flies, circles calmly in the pale sky, often over stupas or temples around Enoshima, Japan (I tend to understand a poem visually as reading haiku. It might relate to photography?). On the other hand, Hopkins' sonnet in the Victorian era is more musical. A nasal consonant 'n' in the fourth line has effective resonance. Repetitive sprung rhythm makes the poem powerful. In the sestet, getting radiant, eloquent. Spiritual ecstasy in the last line, like Blake's poems - the unity of bird and something with divinity. Noted that I am an agnostic.

I caught this morning morning's minion, king-
dom of daylight's dauphin, dapple-dawn-drawn Falcon, in his riding Of the rolling level underneath him steady air, and striding High there, how he rung upon the rein of a wimpling wing In his ecstasy! then off, off forth on swing, As a skate's heel sweeps s…
Read more
February 03, 2020
Today's poem

Free verse with only one sentence (O dazzling skill). In the last sixth line, with a trio of mono-syllabic words, the prosody effect of is boogie-woogie. The wine is sparkling, the Buddha is gone with bubbles.


The Wine by Michael Metivier
(from the website of Poetry Foundation)

When the townspeople
gave the teenaged Buddha
a glass of wine
so delicious he grew
to an unthinkable size
and froze into a blue statue
that shielded the town
from a wave that broke
upon his back
and would have swept away
the town if he’d not tasted
the wine and afterward the people
were overjoyed and said
they would do good deeds
like carpool their children to school
more often and plant lettuce
everywhere while the Buddha
melted into water and receded
into the calm sane sea.
Read more
January 30, 2020
Book Review
from Japanese magazines in English

- Night crept up on them - Sappho -
At night the calmness embraces readers with warmness in the poem. Although there have been thousands of poems written with a theme of sleep and the poem belongs to the category of Ages 14-16 in Poetry Archive, it brings fresh impressions to adult readers, too. Fine devices (variation in number of lines, enjambment, etc. & etc.) stay in details of the poem.
Please read it aloud, recite it before hearing footsteps of sleep, sitting at the gate of a dream, far-off world.

is stillness paused in stone,
the bronze cast of a posed god,
Eros, whose face, limbs,
have softened to childhood.

It is the breath before prayer,
a window staining its church
with sacred light; or secular,
a cashpoint glowing
in a late night precinct.

Sleep is air, the secrecy
of a barn owl in flight;
her pale pulse. It is the last gasp
of smoke from a candle, blown
for a wish; a seed puffed
f…
Read more
More posts