Naomi Foyle is a poet and tutor of poetry reading and performance in the previous workshops. It is unforgettable for me that she praised brilliant poetry translation of Mahmound Darwish by a Palestinian-American poet and translator Fady Joudah. I would like to briefly introduce her latest collection ADAMANTINE (published by RED HEN PRESS in July 2019). 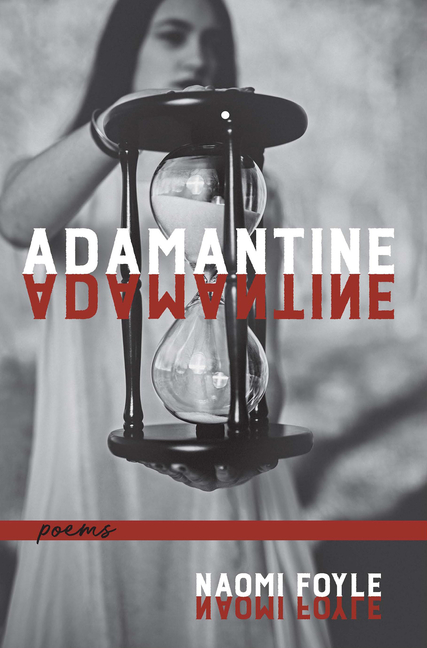 Her third collection is full of indomitability and startling power, as suggested by the book title ADAMANTINE. Meanings of ‘adamant’ and ‘adamantine’ are redefined prior to all poems in the collection: hardness or never-broken intent and situations. Her voice is political with a sharp edge and a brew based on the mixed grains of Canada, Arab, and Britain. The book consists of two parts: ADAMANTINE and THE CANCER BREAKTHROUGH in forms that are sometimes long, often dense.
The title poem in the first part is the ode to Elisabeth Fritzl in Austria who was involved in a tragic case (sexual abuse, rape): ‘Your father chose you ‘for his own’ / because you were uncontrollable- / a truant with a lip on her, / a climbing rose he couldn’t train.’ Such a calamitous case in the poem also has happened in Japan, and readers fall into trepidation and grief in the unforgiven violence, crime. The poem first gives me shocks, makes me painful, however, changes my feeling by reanimating lines: ‘but Elisabeth, you survived. / Didn’t starve yourself to death. / Didn’t smash your brains out, / Didn’t do to your children / what he did to you.’ and ‘But you were always / your own daughter, / a glinting adamant’. Here, readers have great empathy with the poem.
The poem ‘Tekahionwake’ is British-Canadian Foyle’s homage to a Canadian author E. Pauline Johnson (1861-1913) with indigenous heritage: Mohawk. It is possible for me to read the poem with the historical fact on Ainu poets in Japan. The first stanza epitomizes aspects of Johnson’s life or a historic one: ‘Canada’s buckskin princess’, / you criss-crossed your stolen country, / in rude new towns and cities / gathering, giving back / its shucked and scattered histories / of stoic chiefs, brave maidens, / and the battle of Cut Knife Creek.’ Sequentially, the text exhibits an ironical tone to Johnson’s writing and performance. Whatever her literary existence in the history might be invisible or lost, her achievement is never forgotten, undiminished, expressed as if with a proverb: ‘though history seeks to drain it, / the river of a language / can force a course uphill.’ – the last stanza is simple, eternally true.
The poem ‘After the Biopsy’ is the beginning of the second part with a subtle undercurrent of her own breast cancer treatment. Vivid metaphors are heartrending, for example, the last line ‘by my oyster breast’. Throughout the part, her emotional flow is drawn with diagnostic results, sometimes recalling a poet Helen Dunmore’s work. In the poem ‘The Cancer Breakthrough’, there is a hope – disappearing of cancer, her struggle wins: ‘The cancer breakthrough / is happening now / and again, and again - / in the echoing space, / that cold ocean of years, / between one heart / and another.’ The last poem, ode to a great poet and translator Marilyn Hacker, ‘Post-op’ totally has multi-layered metaphors and the last line ‘an untranslatable change’ is breathtaking – for the poet Foyle herself and world beyond Adamantine.